Follow the Danube at the DZM: More stories about the European river 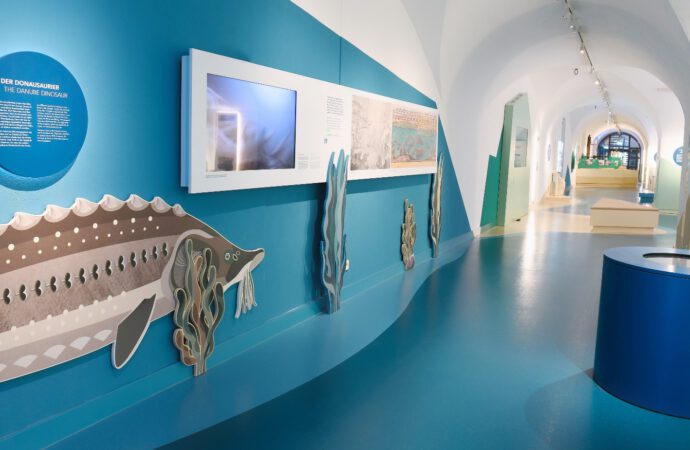 The Danube Swabian Central Museum Ulm has expanded its exhibitions

“Look at me, says the Danube, tall am I, beautiful and wise. There is no one in Europe who could hold a candle to me.”

This quote from György Konrád’s “Danube Hearing” can be found in the Danube Swabian Central Museum (DZM) in Ulm, which was reopened on April 30, 2022 with a new exhibition concept.

After 18 months of renovations, the DZM presents a significantly expanded and experience-oriented view of the Danube region in its historical rooms in the former federal fortress of Ulm on around 1,500 square metres, in keeping with Konrád’s quote. The preexisting permanent exhibition on the history of the Danube Swabians was modernised and updated. It remains one of the two focal points of the DZM, which originally opened in 2000.

The second, completely new focus is the Danube itself. The museum’s director Christian Glass speaks of a “rejuvenation cure”. Since the generation of Danube Swabians with personal experience is becoming smaller and smaller, the DZM also has to break new ground, says Glass, in presenting history and stories about the Danube.

This mainly happens in the new focus of the exhibition, “Danube. River Stories”. The aim is to specifically address families, adults and children. The DZM wisely refrains from giving a comprehensive and encyclopedic presentation of the whole Danube region with its almost 3,000 kilometers of river, 112 million people and 10 riparian states. Rather, the concept developed by the Berlin-based creative office “it’s about” in cooperation with the DZM picks out 22 exemplary “river stories”.

With many objects, photographs, films and illustrations, this exhibition tells 22 stories about the Danube. The focus is on both the natural space and the people who lived and still live on and with the river. The Danube as a travel and economic route and as a space with great cultural diversity are further thematic focal points. All this is done with many interactive elements, such as audio and film stations or hands-on objects. The explanatory texts in this exhibition are written in German and English.

Visitors can learn more about the legendary “Danube dinosaur”, the beluga sturgeon, and fishing, for example from the fishermen in Apatin, Serbia, on the Serbian-Croatian border. Interferences into the ecosystem are illustrated, among other things, by looking at the construction history of the large run-of-river power plants at the Iron Gate on the border between Romania and Serbia.

A ship model of an “Ulmer Schachtel” (“Ulm box”), which emigrants used to
travel down the Danube from Ulm in the 18th century, specially developed for the museum by model builder Werner Klassmüller (Elchingen), shows the arduousness of journeys in those days. The Donau­dampf­schiffahrts­gesellschaft (Danube-Steamboat-Shipping Company), founded in 1829, opened a new chapter that, in addition to the transport of goods, eventually also made tourist travel on the Danube possible.

The tragic and bloody history of the Danube region, as a struggle for power, borders and zones of influence, is deliberately not left out of the “River Stories”. The Holocaust during the Second World War in Serbia, occupied by German troops as part of the former Yugoslavia, is also addressed.

The Danube as an escape route, both for refugees of German origin after the Second World War and for refugees from Nicolae Ceausescu’s dictatorial Romania, from the 1970s onwards in the direction of Yugoslavia, is another tragic chapter that is taken up in the DZM.

The cultural history and diversity of the Danube region is reflected in the “Ottoman” island of Ada Kaleh at the Iron Gate, which was fl ooded in 1971, as well as in the coffee house culture, carnival customs in southern Hungary or the large music festival “Exit” in Novi Sad / Serbia.

The revised permanent exhibition “Danube Swabians. Departure and Encounter” provides comprehensive insights into this special chapter of European migration history, from the late 17th century to the present day. The origins and languages of the Danube Swabians, their migration from Ulm along the Danube to south-eastern Europe, their life there in villages and towns, the cultural and economic interactions with the ancestral population become comprehensible.

The effects of National Socialism, flight, expulsion and deportation after the
Second World War as well as the life of Danube Swabian minorities in the socialist states after the end of the war are part of this history and its presentation in the DZM. A special cinema station with contemporary witness films from Hungary, Romania and Serbia was developed for this purpose.
Under the motto “Between Ohio and Osijek”, the DZM brings Danube Swabians and their descendants all over the world into focus. The integration of the expellees from the Danube region into the Federal Republic of Germany after the Second World War is also part of this context.

Another new asset is a media guide specifically developed for the exhibition on the Danube Swabians, which directs visitors through the exhibition in German and English.

In addition, the DZM offers a whole series of thematic guided tours – also especially for families and children – through both large exhibition areas, including tours with actors and actresses.

Behind the DZM is the Foundation Danube Swabian Central Museum, which is supported by the Federal Republic of Germany, the state of Baden-Württemberg, the city of Ulm and four Danube Swabian compatriots.
Funds from the Federal Government, the State of Baden-Württemberg and the City of Ulm totalling around 1.65 million euros were raised for the alterations of the museum. The City of Ulm additionally supported the renovation of the building and building services with almost 1 million euros. Further information about the DZM is available at www.dzm-museum.de/en