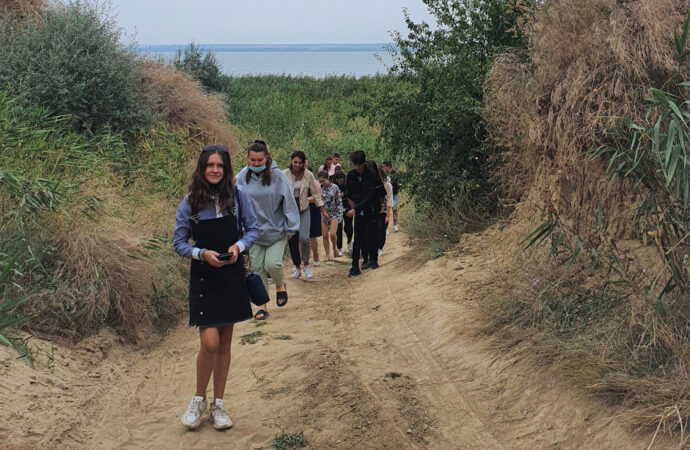 With the intention to shape and invest in the future, the Foundation Baden-Württemberg Stiftung is committed to secure and strengthen the sustainability of the state. With intercultural programs, the Baden-Württemberg Stiftung promotes the exchange of knowledge and development of civil society, including the fostering of peaceful international relations. The program “Perspective Danube: Education, Culture and

The program “Perspective Danube: Education, Culture and Civil Society” addresses current socially relevant challenges, it shows how one can participate directly and supports communication between different population groups, cultures, and religions. If we want to build bridges of tolerance and transcend mental and physical borders in people’s minds and actions, then the best place to start with is the next generation. That’s why the program has funded more than 40 projects for and with children and young people since 2012.

Although the worldwide COVID-19 pandemic obstructed international networking within the framework of such projects, three projects were realized in the eastern Danube region in 2021. They encouraged young people to deal with topics such as discrimination against Sinti and Roma, international and environmental protection in the Danube Delta.

During the project “Sastipe” (which means “Hello!” in Romanes), organized by DENK GLOBAL! (Germany), the youth NGO ARCA (Ukraine), and Ďakujem Palikerav (Slovakia), young people from Germany, Ukraine and Slovakia enabled for three days a virtual get-together of youth. They exchanged ideas about the history, culture and empo-werment of Sinti and Roma in the Danube region.

On the first day of the event, the young people learned a lot about the history of the Sinti and Roma. During a virtual museum tour, the participants acquired information about the history of persecution of these population groups. For example, the stories of Roma heroes and heroines were compiled and presented (including the story of German Sinto boxer Johann Wilhelm “Rukeli” Trollmann). The second day was dedicated to empowerment – both online and offline. Here, the event mainly focused on how to recognize discriminatory structures in everyday life and in virtual space, how to break them and, if possible, how to free oneself from them. The last day of the exchange gave (academic) education programs for Sinti and Roma as well as opportunities to study the Romani language (e.g. the Roma Graduate Preparation Program of the Central European University or the study program “Romani Studies” at Charles University Prague).

The “International Summer Camp for Creativity and Integration”, which took place in a small town near Bucharest, united children and young people between the ages of 12 and 17 from Romania, Ukraine and Moldova, including Sinti and Roma from Buduhala and from Potlogi, Romania. The summercamp was organized by the Cuza Society Heidelberg (Germany) in cooperation with the DAR Development Association Romania. During a series of activities, participants had the op-portunity to get to know each other and make friends, and to learn a lot about the history and traditions of the host country as well as the countries of origin. In four workshops, guided by master craftsmen, they learned traditional crafts such as basketry, pottery, needlework and glass painting. Together they also visited historical and tourist sites (Bucharest, Peles Castle in Sinaia).

The participants were very enthusiastic about the project, so that the project goals were more than met. The Sinti and Roma children were integrated into the community quite naturally. They felt very comfortable, which is evident from the letters they have sentafterwards.

In the environmental protection project “Keep Danube diversity alive!” young people from Ukraine and Moldova aged 13 to 17 came together in Ismajil (Ukraine) from 23 to 27 August 2021. The camp was organized by Child-Fund Deutschland e. V. (Germany), the “Agency for Development and Investment in the Southern Region” (Ukraine) and the Association of Mothers with several Children and Women Entrepreneurs of Gagauzia “Vesta” (Moldova). It focused on topics such as biodiversity, environmental protection and cultural diversity. The young people participated in a solution-oriented simulation game on environmental challenges in the Ukrainian and Moldovan Danube region. They discussed how they can motivate others to behave in an environmentally friendly way and how they can contribute as active young people to the solution of local problems such as water pollution and threats to biodiversity. During this exchange, questions arose that can be addressed when the young people implement their own small projects as part of the overall project.

The camp ended with the simulation game “Lake of Utopia” for intercultural understanding and strengthening non-violent communication. In groups, the young diversity ambassadors founded their own island states and made clear which values and laws would apply to them and how they would live together peacefully with the states of the other groups. The ensuing discussion showed that democratic values and gender equality are important to the young people from both countries.

The experiences from all three projects show that promoting intercultural understanding is more important than ever. In addition to the many positive project results, it became clear that the pandemic has excerbated the problems of people who already live in difficult circumstances because of their ethnicity and the discrimination associated with it.