“It matters to me that I meet people where they are” 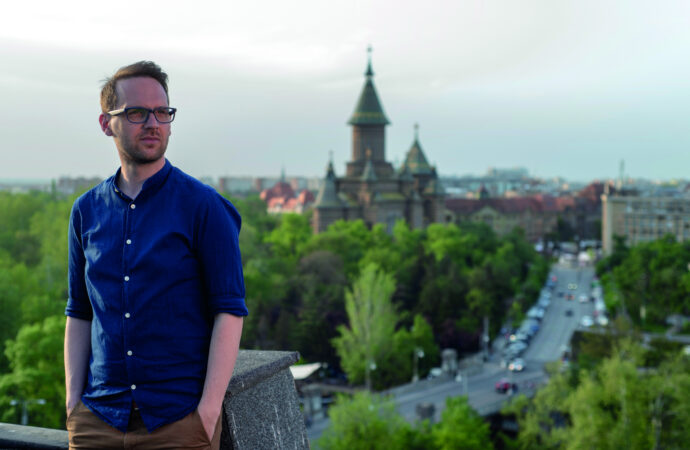 He is citizen of Germany and mayor of a city in Romania: Dominic Fritz (37), originally from Lörrach in the Black Forest, has been at the helm of Timișoara City Hall since September 2020. Fritz used to be head of cabinet of former German President Horst Köhler and grew fond of the western Romanian city

He is citizen of Germany and mayor of a city in Romania: Dominic Fritz (37), originally from Lörrach in the Black Forest, has been at the helm of Timișoara City Hall since September 2020. Fritz used to be head of cabinet of former German President Horst Köhler and grew fond of the western Romanian city back in 2003, when he completed a year of voluntary social service there. Since then, he has repeatedly come to Timișoara to carry out cultural and social projects. In the following interview, Dominic Fritz reveals what he intends to do as mayor of Timișoara.

One of your concerns as mayor of Timișoara is to make the city bicycle and pedestrian friendly, but also to reorganise public transport in the city. What is the current status of these projects? Is there already a concept for sustainable mobility in the city?

We are very busy putting the whole thing on a new footing, both in public transport and in terms of cycling and pedestrian infrastructure. We are going to commission a study that will reanalyse the public transport network, because it is still functioning on the basis of the network from the 1970s. We want to invest massively in public transport. At the same time, we are currently working on a project to connect different cycle paths in Timișoara and, of course, we also want to have the existing cycle paths repaired. As far as pedestrian infrastructure is concerned, we are working on various district projects, where
we want to create new connections within districts, especially between apartment blocks.

At the end of April, as an absolute novelty for the employees of the Timișoara local government, you took a bicycle tour through the city with representatives of the Office for Environmental Protection and Urban Development, with the aim of discovering the problems on site. How did the city hall employees react to this, and what did they notice?

Well, first of all, it was a bicycle tour not only of one single office, but of very different offices, the environmental office, the urban development office, the technical department, because we noticed that many of the projects are not planned together at all, but everyone plans their own part. And because we noticed that officials don’t really have a sense of how much of their projects really arrives in the city. So we thought it would be very interesting to experience this on a bicycle, to find out ourselves, for example, how difficult it is to move through the city by bicycle. At the same time, of course, the common discussions on site are important to us. We want to repeat this every fortnight, in different parts of the city, in different constellations, and hope that on the one hand the officials will learn to understand each other’s positions better and to incorporate them, and on the other hand, of course, to be closer to the reality of the city.

Your predecessor was often accused of cutting down (healthy) trees in the city. How “green” is Timișoara at present, and how do you plan to increase this quota?

Yes, I would say that we are lucky that – on paper – we have a very high quota now, because the city forest, the hunting forest, was added. This was previously in government hands and has now been transferred to the city. That helps us purely statistically. But of course, that doesn’t change the situation in the city itself. And we want to counteract this in a number of ways. Firstly, with a training programme for the companies that maintain our green spaces, so that they know how to prune trees properly, when to cut them down, etc. We also want to complete the green space register, of course.  Furthermore, we have a plan for a new forestation on the outskirts of the city. We want to design a new big park in Ciarda Rosie. We are working very hard to have a new green space policy take root in the city hall and we will also create a new position of chief gardener for this.

You have been invited to the climate conference in Ulm, which will take place on 20 and 21 May. Do you follow the climate policy that is being pursued in Western Europe and especially in Germany? To what extent do you incorporate ideas from Germany into your local climate policy decisions?

Yes, I follow climate policy. Of course, I notice that the discourse is very different. Here in Romania, we have hardly any public awareness that there is a problem as far as climate protection is concerned. Basically, there is a great openness for environmental protection issues here, but this refers primarily to visible things, especially green spaces, trees, mobility, etc. It is a bit more difficult when the public is aware of the issues. The situation is a bit more difficult when it comes to “abstract” climate policy. And I believe that it is important that we manage to make people understand why this is relevant for their own lives and in their own city. That’s why I’m a bit cautious when it comes to the German discourse, because it’s important to me that I meet people where they are; that they themselves have the feeling that this is not a new culture of prohibition and that concepts are not being imported from somewhere else, but that they really have the feeling, for example when it comes to pedestrian and bicycle infrastructure or green spaces, but also air quality: “Hey, this actually concerns me and maybe I can even contribute to a more modern environmental policy here.”

The European Capital of Culture Year 2023 is still a big topic. What is the current status of this project? Especially in view of the recent speculation that Timișoara could be stripped of this title…

The speculations that the title will be revoked, those are political games, the people who put that in the public space… There is no danger of that, but we are already under a lot of time pressure, even though there was this postponement from 2021 to 2023; because the project is nowhere near where it should be, neither with what concerns the cultural programme, nor with what concerns the cultural infrastructure. We are now working very hard to push that forward, as far as the infrastructure is concerned. Unfortunately, the project is currently blocked because the association does not have a complete board. We are waiting for the Ministry of Culture to appoint a representative to the board of the association so that we can hold a general meeting and then put the association back on a new footing. That is also why I will now travel to Bucharest again to talk to the Minister of Culture about this. All in all, I am still optimistic that we will manage to use this year as a real motor for tourism and culture here in the city, not only for 2023, but above all for the years after that.

By the way: do you know the Lord Mayor of Budapest? A network of cities in the Danube region could be advantageous.

No, I haven’t met the Lord Mayor yet, although that is certainly interesting. I am currently in the process of reorganising the partnerships with the cities with which Timișoara is twinned. I have already held talks with the mayor of Mulhouse in France, with the mayors of Graz, Gera and Karlsruhe, and I want to continue this. I will certainly also visit Szeged and Novi Sad, i.e. our Hungarian and Serbian twin cities, soon, because it is important that Timișoara benefits from this European character of its own identity, takes this further and promotes mutual learning in the whole region.