Lots of ideas from the Danube: Young people turn out to be power plants for the future 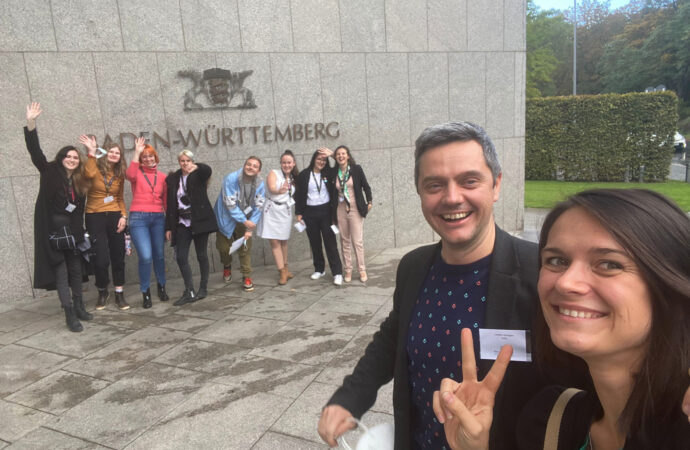 What is on the minds of young people from the 14 countries along the Danube? What does Europe mean to them? How do they deal with climate change? Do they want to stay at home or go abroad? What are their concerns and visions? These are all questions that students from Romania, Bulgaria, Ukraine, Moldova,

What is on the minds of young people from the 14 countries along the Danube? What does Europe mean to them? How do they deal with climate change? Do they want to stay at home or go abroad? What are their concerns and visions? These are all questions that students from Romania, Bulgaria, Ukraine, Moldova, Hungary, Serbia, Montenegro, Bosnia-Herzegovina, Croatia, Slovenia, Austria, Slovakia, the Czech Republic and Germany discussed at the “Youth Danube Salon”.

This three-day conference was organised in September by the Baden-Württemberg State Ministry together with the Ulm Danube Office, the Service Office for the Danube Region Strategy, the Baden-Württemberg Centre for Europe, Agapedia, Ileu, Danet and Danube Youth. It was a virtual meeting. So anyone could simply join in from their home country and have their say.

At one of the three discussion evenings, which took place under the motto “Should I stay or should I go”, 62.5 percent of the 66 young people stated in a digital questionnaire that they wanted to leave home one day. It became clear that many of them associate leaving with growth, opportunities and success. For them, Europe means peace, prosperity, future and a better quality of life. In groups, the young people eagerly discussed the things that bother them in their country. “Women are treated as if it were still the last  century,” criticised a young woman from Ukraine, for example. Many warned that they did not feel taken seriously by politics in their country.

Unemployment as a problem

In Bosnia, some young people are worried because politicians spend too much money on “unimportant things”, as they said. “Instead of for the future of us young people.” And yet, unemployment is so high, they said. But education in the Balkan countries – young people from there agreed – was “not very good to be successful abroad later on”.

A young man from Montenegro made it clear that he thought his country was beautiful. “But everything is full of tourism. And many jobs only work with tourism. That’s why in winter some are unemployed. And everything is closed then.” In winter, he said, there is not much left of summer life. That frustrates him.

A young woman from Ukraine said that many of her generation leave. This creates a shortage. “Everyone flees to look for better opportunities for their lives in other countries.” But according to her, it is not good if everyone leaves.

But what would the young people like to change? Many would like to see less corrupt politicians. One young woman from Croatia had an innovative suggestion: “There should be a standard for what every politician must have done in his or her life or what they are able to do in order to be allowed to become a politician at all.” Another wish was: “That educated people are respected more.” Another young woman said:

“I want to be surrounded by smart and determined people who think of good things for the world.”

At the same time, you could feel that many of the young people loved their country even so. They were enthusiastic about the nature there, about their wonderful childhood, about the people who are important to them there. About the mentality that connects them and keeps them there. All the young people who took part in the discussion seemed very passionate and ambitious in their concerns for their country and Europe.

On the conference day organized by the associations Danube Networkers and the “Institut für virtuelles und reales Lernen in der Erwachsenenbildung” (Institute for Virtual and Real Learning in Adult Education) an intergenerational exchange took place. For three hours, almost 150 young and older people between the ages of 16 and 86 from all the Danube countries reflected on “digitalisation”, “environment”, “culture”, “demographic change” and “migration”. The young people called for more exchange between the generations from Eastern and Western Europe. For example, in the form of programmes including meetings. These could be partly online, but not commercial. In this way, young people could better share their interests and advocate for their concerns.

Another day was dedicated to the experiences of young people from non-EU countries: Ukraine, Moldavia and Serbia. What other cultural backgrounds and opportunities do they have? For example, when it comes to mobility, jobs and education.

The Youth Danube Salon concluded in mid-October in Berlin, where the Baden-Württemberg state government and its representation in Berlin had invited the participants. Some of them were “live on site” – others took part virtually. During the evening, they presented their ideas and wishes for their Europe of the future. For  example, State Secretary Florian Hassler, who is responsible for European affairs in the state, Normunds Popens from the EU Commission and ambassadors from the Danube countries. These included exchange programmes that integrate young people from non-EU countries. They should also be able to get visas more easily.

The EU should encourage non-EU countries to do more to protect the climate, they wished. Basically, the young people from the Danube region would be happy about more opportunities to participate in political decision-making processes and about additional programmes for “migration as a temporary experience”, for those from non-EU countries as well. They could then use these experiences and the knowledge acquired in their home countries.

Young people also long for a European standard of education. In some countries of the Danube region, there is still a need for improvement in terms of human rights, equality and sexual self-determination. The migration of skilled workers from Eastern to Western Europe is causing instability and an ageing society. Among other things, there is a shortage of nursing and care staff for the elderly.

Furthermore, there are great differences in access to culture between Western and Eastern Europe, between urban and rural areas and depending on social affiliation. Here, too, exchange programmes could help. The voting age should be lowered, participants said, because young people have many ideas for a successful and fair future in Europe. But often they are not heard.

Conference on the future of Europe

That should change. The young people from the Danube were not only heard at the Youth Danube Salon. At the end of the conference, they formulated a series of these demands to EU politicians and submitted them as a contribution to the “Conference on the Future of Europe”. This is a participatory platform of the EU Parliament and the EU Commission that offers European citizens the opportunity to discuss their proposals for their Europe of the future. The young people’s proposals are also to be included in the European Commission’s final report. Especially the young people of the Danube countries, who are disappointed by the politics in their country, can now hope that the EU will stand up for them. So that they can enjoy living in their countries and make a difference for the future.

The EU Commission has now proclaimed 2022 “Year of Youth. Young people throughout Europe are called upon to express their interests, wishes and ideas the European Commission in a survey.