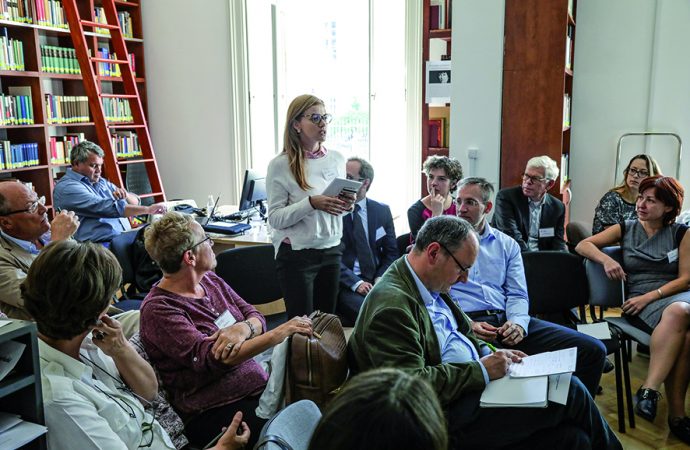 The “Danube Participation Day 2017“ took place on October 17th 2017 at the Andrássy Universität Budapest (AUB) in Budapest. Prior to the annual political forum on the EU Strategy for the Danube Region, 120 participants from civil society, academia, local governments and ministries discussed current developments around the topic of civic involvement. The fourth edition of the event was organized by the Danube Civil Society Forum in cooperation with Foster Europe, the Baden-Württemberg Stiftung (Baden-Württemberg Foundation) and further partners. For the period between 2016 and 2018, the “Participation Days“ are supported financially as part of the program Perspektive Donau: Bildung, Kultur und Zivilgesellschaft (Prospective Danube: Education, Culture and Civil Society) from the Baden-Württemberg Stiftung.

The audience agreed about the highlight of the ”Danube Participation Day 2017“: a moving contribution by the author György Konrád. In his literaly speech, the Hungarian writer emphasized what it means to be a European: curiosity, the drive to constant learning and openness to engage in discussions with the possibility to change one’s own point of view. According to György Konrád, Europe was shaped throughout its history by migrants. Therefore, openness towards Non-Europeans should be another characteristic of Europeans, as stated by the Hungarian novelist. The “Danube Participation Day 2017“ marked an important opportunity for members from civil society across the Danube region to network and to exchange their experiences. According to Stefan Lütgenau, director of Foster Europe and one of the organizers of the “Danube Participation Days“, the event series evolves currently from an annual to a process-oriented format. Therefore, in Budapest five new working groups were established, which will work on topics such as “the inclusion of Roma minorities“ and “good governance“. By doing so, they will contribute to answers to important questions of our time and they will help to sustain bridges between Eastern and Western Europe. The upcoming „Danube Participation Day 2018“, which will take place in Sofia during the EU-Presidence of Bulgaria, will show the results of this endeavor.

Participation leads to acceptance among the population

In his opening speech, Rudolf Schicker (responsible for Institutional Capacity and Coordination of the EU Strategy for the Danube Region), emphasized the significance of participation for social cohesion. Especially for goals such as overcoming unemployment and disaster response, civil society can be an important partner for governments.  Dr. Andre Baumann, state secretary in the Ministry of the Environment, Climate Protaction and the Energy Sector of the state of Baden-Württemberg, appealedto civil society to engage more with governments. Adressing governments, the former head of NABU Baden-Württemberg (Nature and Biodiversity Conservation Union) called for greater levels of sensitivity for the demands and ideas of civil society. By showing an open attitude towards participation, governments are likely to gain higher levels of approval ratings among the population, as stated by the state secretary of the southern German state.

Besides political speeches, the morning session was marked by the latest scientific insights around the topic of participation. According to Dr. Zoltán Pallinger, head of the faculty for Political Theory and European Democracy at the AUB, civic involvement is enabled by information about public works, the opportunity for free speech and the mediation between citizens and government. This can lead to political education of the public, an increase in knowledge at all levels of governance and mutualtrust between the two different sides. Dr. Zoltán Pallinger underlined that in the current phase of globalization, taking the demands of citizens seriously should be of particular interest to governments. The enhanced complexity of the daily news cycle leads wide parts of the population to a perceived lack of power. This in turn can be alleviated through civic involvement, as stated by Dr. Zoltán Pallinger. Clara Moder, scientific assistant at the Center for Social Entrepreneurship at the Vienna University of Business and Economics, presented the results of a joint study with the ERSTE Stiftung (ERSTE Foundation) about civil society in Middle and Eastern Europe. The study shows that fundraising is the main challenge for non-profit organziations in the region, as international donors withdraw their financial support. This trend is worsened by the fact that funding is largely limited in this part of the world. Besides, growing state restrictions for civil society lead to self-censorship. The study underscored the significance of awareness of common interests among civil society across Europe. According to the scholar from Vienna, this can effectively help to overcome challenges such as state restriction and scarcity of funding opportunities.