DANUBE YOUTH NETWORK – Back to the future 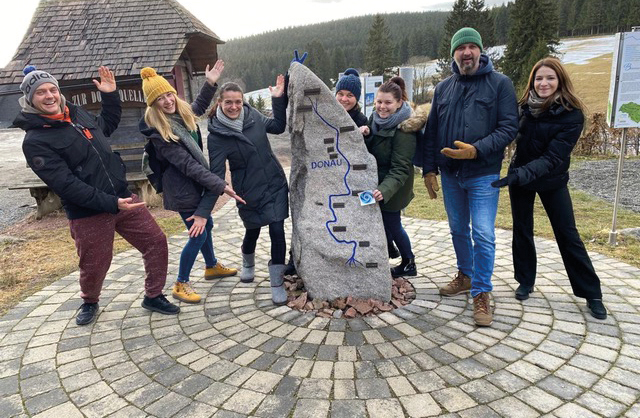 Do the EU and the rest of Europe still have a future? This question is justified, as one reads again and again how forces are being activated to break them up and that national values are making a strong comeback. But there is one piece of good news. The future is promising: thanks to the

Do the EU and the rest of Europe still have a future? This question is justified, as one reads again and again how forces are being activated to break them up and that national values are making a strong comeback. But there is one piece of good news. The future is promising: thanks to the young people whose voices are now being heard in the influential circles of Brussels.

This is, among others, thanks to Stefan Barth and Iryna Gumenchuk of the international children’s charity Agapedia. In the coalition agreement of 2016, the state of Baden-Württemberg had pledged to examine what role the state should play in the realization of a Danube Youth Network.

After more than two years of work with the Ministry of State’s funding project “Danube Youth Participation”, the NGO presented a concrete proposal for a sustainable  implementation of the Danube Youth Network with its partners: the Liebenau Foundation as project executing agency, together with six “Danube Core Networkers” and other long-time NGO partners in the Danube region.

Agapedia means “love for children” and is the charity organization of former soccer player and coach Jürgen Klinsmann. It was founded in 1995 and is based in Stuttgart, Germany. With its four subsidiary foundations in Romania, Bulgaria, Moldova and Georgia, it supports children and young people in difficult life situations.

The Danube region is the ideal symbol for Europe. As the second longest river, the Danube flows from the Black Forest to the Black Sea through ten European countries. With the riparian states, there are a total of 14 countries in the region. 115 million people live here, 26 million of whom are 18 to 35 years old. Iryna is responsible for social media and networking in the Agapedia network. Since 2015, she has been participating in and organizing transnational youth meetings as part of the EU Strategy for the Danube Region (EUSDR). And successfully so.

In Baden-Württemberg, the youth of Europe are taken seriously. On October 15, 2021, the first Youth.Danube Salon took place at the Baden-Württemberg State Representation in Berlin. Florian Hassler, State Secretary and representative of the state of Baden-Württemberg to the European Union, who is responsible for policy coordination, European policy and cross-border cooperation, explained how important this gathering of young people from 14 different European countries is: “We need more youth encounters. The first Youth.Danube Salon is a project to experiment, to learn from and to develop it further.” He recounts how he himself participated in the Erasmus program in France as a student. Today, he would like to see more exchanges with Southeastern Europe to learn about the lesser known parts of Europe.

Stefan Barth also recognized this years ago and invited Aida Beca and her students from the Bosnian-Herzegovinian capital Sarajevo to a summer camp in Plovdiv, Bulgaria:

“One day our country will also become a member of the European Union. At the camp, we had the opportunity to show outside our borders that we have great young people in the country who want to change the situation. Our youth are not limited, as is often claimed, to ethnic-national interests or religion, but bring with them an open and broad awareness,” the high school teacher explains hopefully.

Because of the pandemic, many projects could only take place online. But even there, a lot has been achieved. This was noticeable at the first Youth.Danube Salon. 260 participants from 14 different countries joined forces to create a common future for Europe. The end result showed: We adults can learn a lot from young people! Lyben Georgiev of the Bulgarian NGO Re-Act has a knack for integrating young people into society with simple and creative ideas: “I love to connect young people, to give them back their value so they can realize their purpose and true potential.” So he launched Shoot by Youth. The video project, funded by the Baden-Württemberg Foundation, challenged young people of Europe between the ages of 15 and 25 to form teams of three to five members from different Danube countries and create short videos about a local problem in their city or region. Four winners were awarded prizes at the first Youth.Danube Salon in Berlin.
The topics were diverse: from lack of sex education in schools to environmental protection, a voice for youth to rediscovering critical thinking. No matter where the young people come from – if they are brought together, fears of contact quickly disappear. The unknown becomes the known, because they all share the same desires and fears.

Young people would also become more involved in the EU if they were listened to and taken seriously. Because it is like the Danube – only cooperation between the countries along it and balance of opposites can keep the river healthy. Flowing water knows no borders. If it is protected only in one country, it will not be of much use. All countries must unite and be there together for the river. It is the same in society. The adults (mostly) bring experience with them. However, this will not bring them any further without the young people’s visions of the future, which can be realized with the knowledge of the adults.
Stefan Barth is confident and hopes that his many years of work have finally produced first results: “The project volume of the Danube Youth Participation project comprises a total of 350,000 euros for a good two years and is thus relatively cost-effective. And perhaps in times of tax shortfalls, constructive cooperation will succeed in planting a su-stainable Danube Youth Network after all.” On the Shoot by Youth website, the following advice is given to the young video creators: “Remember – creative doesn’t mean complicated!” May this wisdom also reach the hallowed halls of the EU!