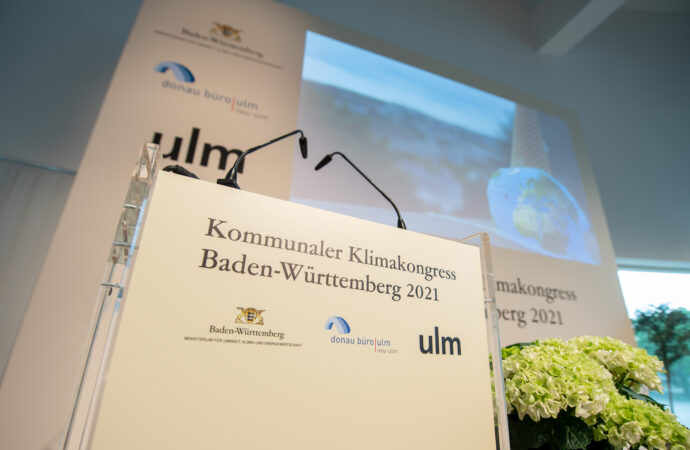 Which stories have worked well for you? What innovations have you come up with that are good for the climate? Exchanging on all kinds of climate protection projects in municipalities – that was the aim of the municipal climate congress organised in May by the Baden-Württemberg Ministry of the Environment, the City of Ulm and

Which stories have worked well for you? What innovations have you come up with that are good for the climate? Exchanging on all kinds of climate protection projects in municipalities – that was the aim of the municipal climate congress organised in May by the Baden-Württemberg Ministry of the Environment, the City of Ulm and the Danube Office Ulm/Neu-Ulm. With around 660 registrations, many cities, municipalities, districts and institutions participated online. The newly elected Lord Mayor of Timisoara in Romania, Dominic Samuel Fritz, and Vice Mayor Kata Tüttő from Hungary’s capital Budapest also emphasised how important climate protection is.

“Climate protection can be fun.” This was the message sent out by the Lord Mayor of Ulm, Gunter Czisch – and he highlighted the “Fridays for Future” movement. According to Czisch, the movement created an atmosphere that inspired many others. He said the municipalities were now feeling the “tension”. In addition, the past one and a half years of Corona have turned some long-held convictions upside down. Czisch: “We now have a fundamental crisis. People feel that our very foundations are challenged: How do we live together? What is important for our future and for our children’s future? Higher, faster, further… That’s no longer possible.”

Ulm calls itself not only a city of science, but also a city of the future. Digitisation and sustainability are supposed to offer its inhabitants a future that is worth living and will still be so for our grandchildren. However, the night before, weather expert Sven Plöger called for more “blue” and “green” in cities to make them fit for climate change – i.e. more water areas and green spaces for the cooling effect. In Ulm, there is still room for improvement in this respect. A year ago, a new central square was completed at the railway station, which is a stone and concrete desert. Some citizens criticise the lack of plants. But they also criticise the fact that the majority of the city council recently voted in favour of widening the busy B10 that runs through the city. Six lanes are to become eight, and part of the green belt will be removed. The city will become more car-friendly again.

In contrast, the Climate Congress made it clear that many municipalities are trying to make city centres car-free because they have understood that people don’t only want to get to shops and restaurants, but also expect to enjoy their stay in a city. The city of Constance presented a “mobility concept for a car-free city centre” at the congress. Hechingen received the European Energy Award in gold for its efforts in public transport and bike-friendliness.

When the mayor of Ulm, Gunter Czisch, speaks of sustainability, he thinks primarily of technical possibilities in Ulm: the district heating network that supplies more and more households. Or the new requirement that anyone who builds a house on a municipal property must install a solar system. Czisch also has in mind that there is a lot of research on fuel cells, hydrogen and solar energy in his city. Ulm also wants to achieve a climate-neutral administration by 2023. Many municipalities in Baden-Württemberg are currently focusing on better energy management – in other words, they are trying to save energy and identify potential for generating energy.

This can be achieved by taking small steps, such as replacing lighting with LEDs. Or making municipal buildings more energy efficient. Other municipalities, on the other hand, are replacing the municipal vehicle fleet with e-cars.

Vorarlberg in Austria, in particular, has repeatedly pioneered in climate protection. Gregor Sellner from the Energy Institute there not only presented examples of sustainable building. He also showed how municipalities can (re)create a lively and car-free town centre, despite the increase in motorised individual traffic. Blumenegg in Vorarlberg has come up with the project “I koof im Dorf” – “I shop in the village”: anyone who comes to Blumenegg to shop locally receives a stamp in the respective shop, if they have come by bus, bike or on foot. After ten stamps, the stamp pass is full and the customer can get a regional shopping voucher. So the added value stays in the region again.

“Mobility” turned out to be one of the mega-topics of the congress. That became clear in a digital survey in which the participants could take part. It’s a matter dear to the hearts of many. Sebastian Rihm from the Danube Office in Ulm presented how the “Danube Pearls” network strives to enable tourists in the Danube countries to easily move from sight to sight without a car: by bike, bus, train, canoe, car sharing or carpooling. “When you travel around an area by public transport instead of by car, you get more in touch with the country and its people.” You miss a lot when you’re driving 120 kilometres per hour on the motorway.

In addition, the Danube Office already organised a virtual side event with the Ulm Chamber of Commerce and Industry on the day before the congress. Its main focus: “Climate Protection and Green Economy in the Danube-Sava region”. The almost 70 participants were able to make new contacts and initiate cooperation. In addition to people from the Danube-Sava region, the event was primarily aimed at companies that are already active in South-Eastern Europe or are interested in partners, suppliers or cooperation in the Danube-Sava region with a focus on climate protection/sustainability and the green economy. After all, why travel halfway across the globe – to China, India, the USA? When good things are so close by? Supply chains can be shortened again and products thus become more environmentally friendly if the potential of companies from the Danube region is increasingly recognised.