Adis Lukač: “The message of art should be transnational and universal!” 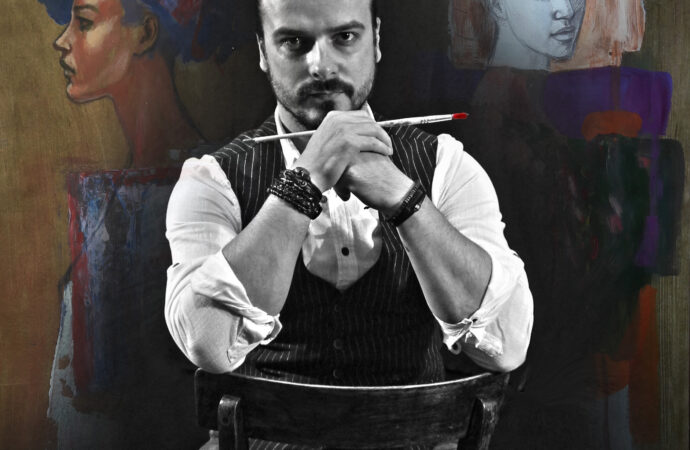 Adis Lukač was born in Sarajevo, where he studied at the Academy of Fine Arts. His main focus is on sculpture and painting. He is the creator of several important works by personalities of the country, such as Tvrtko I Kotromanić, the first king of the medieval kingdom of Bosnia, or Mirza Delibašić, one of

Adis Lukač was born in Sarajevo, where he studied at the Academy of Fine Arts. His main focus is on sculpture and painting. He is the creator of several important works by personalities of the country, such as Tvrtko I Kotromanić, the first king of the medieval kingdom of Bosnia, or Mirza Delibašić, one of the most famous basketball players in Europe. His art addresses themes that are meant to shake us awake, or to recall what has been forgotten. He tells stories about women who carry most of the burden of society on their shoulders or, as currently on tour, he lets survivors of Srebrenica tell their stories so that the victims of the genocide are not forgotten. Today he lives in Sarajevo, where he works as a freelance artist. His works are exhibited internationally.

Why did you become an artist?

I don’t believe in coincidences and think that everything that happens has a reason. My path to becoming an artist was already mapped out. Of course, signs of this were found in my childhood.  As a child, I felt the need to paint and sculpt. I remember shaping several coloured clay at the same time into a big ball. At first it was beautifully coloured, which became completely grey through prolonged kneading. All the fascinating pigments were gone! You can certainly imagine what a big lump of plasticine was in my hands (laughs). Obviously, this artwork “wheeled” me towards art.  Nevertheless, I think it was the wheel of fate that led me to art.

In the international competition for the design of the monument to Mirza Delibasić, one of the most famous basketball players in the world, his was far ahead. The statue in honour of the Bosnian-Herzegovinian athlete was unveiled in Sarajevo this summer.

What does it mean to be an artist in BiH?

Being an artist is a fateful destiny. Having artists in the country is important, otherwise it would be close to hell. Bosnia and Herzegovina is a country with a complicated political system that affects social and cultural life. These are not good conditions for artists in general, but I believe that each of us has a mission. This is not bound to the material. It is only a means to an end. The mission of the artist is to address souls. I like to quote the great Tarkovsky: “The purpose of art is not thoughts, transmission of ideas, dissemination of thoughts. The purpose of art is to prepare man for death, to plough him, to disturb the soul, to make it capable of turning into good.” Somehow I found myself in this quote. The monument of the first Bosnian king Tvrtko I Kotromanic stands in Tuzla. The artist was less than 30 years old at the time when his design was chosen from among numerous well-known artists

What do you want to achieve with your art?

You can find the answer to this question in the previous answer. So art is a mission, a language that must be understood by everyone because it speaks to souls. What inspires me is the human being and his essence. A mystery that is deeply rooted in all of us and moves, dances, to reflect on the surface of the body. The body itself is an ordinary form, but if you attend to the depth of a human being, their fears, hopes, joys etc. then even a fist, a portrait or a leg radiates the unique energy of the universe, which has its own harmony and purpose. Discovering all this shows why you are in this world as an artist. Everything has its reason. If I manage to inspire the soul of the viewer forever with one of my works, I have fulfilled my mission. Women are his favourite subject, who in his opinion carry the greatest burden in society

What is your message beyond your national borders?

I think that the message of art in general should transcend all borders and be universal. It is amazing and interesting to see different reactions to a painting or a sculpture. How different people are and how they approach and analyse the same work differently. Given that Bosnia-Herzegovina is adorned with diversity both secularly and spiritually, I believe there is a lot of richness in it. Somehow this has determined my art, which was born with one wing in the East and the other in the West. Whether I exhibit in the East or the West, the audience will recognise a part of themselves, or what they have in them or what they are looking for in them. Exhibition “Witness” – These works give voice to the witnesses who survived the Srebrenica genocide. Most recently, these paintings and sculptures, strongly reminiscent of Goya’s work “The Third of May 1808”, were exhibited in Bursa, Turkey

What wisdom drives you?

The word of wisdom is a lost cause of believers. Wherever you find wisdom, it is most difficult to accept it. About every wisdom I find or hear I am grateful because it moves me forward, purifies me, corrects me. It shows me my weaknesses and faults to ultimately, I hope, make me a better person. In the words of the great Auguste Rodin: “… one should first be a human being and then an artist”.