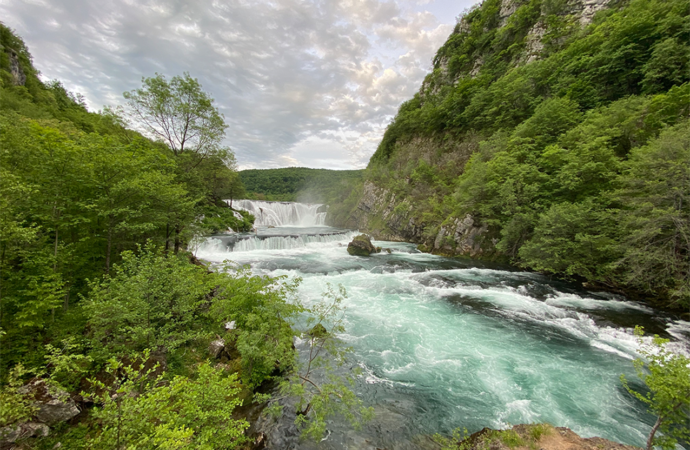 It is quiet. You can hear nothing but the murmur of the river and the chirping of the birds. Although it is cloudy, every now and then a ray of sunlight will hit the surface of the water and make the water’s true colour shine. It shimmers in rich emerald green, and every few hundred

It is quiet. You can hear nothing but the murmur of the river and the chirping of the birds. Although it is cloudy, every now and then a ray of sunlight will hit the surface of the water and make the water’s true colour shine. It shimmers in rich emerald green, and every few hundred metres small waterfalls provide a natural spectacle. I am standing on the banks of the Una River in Bosnia-Herzegovina in the town of Bosanski Novi. It got its name from the Romans. Una – the unique one. And it is, just like all the other rivers and streams of Bosnia-Herzegovina.

“The only remaining crystal-clear wild mountain streams and rivers that are alive are in the Balkans,” explains Ulrich Eichelmann. The managing director of Riverwatch, a Vienna-based NGO founded in 2012, is dedicated to saving the rivers. Especially in the Balkans, where there are up to 70% intact lifelines. “People care about the rainforest and the oceans, but hardly about rivers. Yet they are the most threatened ecological asset worldwide. Not even rainforests are shrinking as fast as the blue veins of our Mother Earth. Since 1970, biodiversity in rivers has decreased by 83%. Their biggest enemy: hydroelectric power plants.” Of course, a hydroelectric power plant is supposed to contribute to the electricity supply. And yet, hydroelectric power plants are bad! They’re the worst thing you can do to nature. “Up to a certain point, they are okay. But we have too many of them. Officially there are 28,000 in Europe and we have reached the overdose a long time ago. The downside is dead rivers. In Europe, almost all rivers and streams are regulated, dammed and diverted. They are more canals than living flowing waters. We have grown up with them and don’t even know what a living river looks like. Let’s take the Danube in Vienna as an example. Unfortunately, it no longer has anything to do with its natural state. Before, it consisted of many arms. Today there is only one big river, regulated by man for centuries”, says Eichelmann.

The Balkans, especially Bosnia-Herzegovina, are an exception: “In this country, the overall nature is so intact that it is something extraordinary even in the Balkans. It could become the Costa Rica of Europe because of its natural jewels,” Eichelmann gushes. Here, the naturally forested mountain slopes along the rivers are also intact, which are part of a river basin. When it rains, the water is filtered and purified all the way to the river. That is why its water shimmers from light blue to emerald green.

In 2010, Eichelmann noted that the Balkan states were becoming more and more interesting for investors. “The political leadership in these countries is a calamity for them. Their whole system is based on exploiting natural resources to get rich quickly” says Eichelmann. Especially the rivers are drawing the interest of people who want to make quick money with hydropower plants. There are about 1400 existing ones, another 3500 are planned, 90% of which are so-called mini power plants. “Our study in the Balkans showed that if all the planned plants were expanded, 49 fish species would become extinct or reach the limit of existence. That would be about ten percent of all European river fish species,” Eichelmann notes.

Such a mini power plant was also to be built on the Una River, right in the heart of the Una National Park near the extraordinary waterfalls. The local population was able to prevent this.
“If it had been built, one of the most beautiful waterfalls would no longer exist.” Anes Podić of the NGO Eko-Akcija, whose headquarters are in Sarajevo, has been fighting to preserve Bosnia-Herzegovina’s rivers since 1990. He recounts how foreign companies, local politicians and private investors want to build these mini power plants because they are profitable for generations: “The builders sign contracts with the state that are valid for 30 to 50 years with the prospect of extension. The state guarantees them the purchase of the electricity produced for a multiple price per kilowatt. For example: the population pays 1 BAM (0.50 Euro) per kilowatt, the state pays 3 BAM (1.50 Euro) according to the contract”.
However, the country is not dependent on this electricity. On the contrary. The existing power plants produce so much electricity that it exports a third of its generated energy to neighbouring countries. These small hydropower plants do not produce any electricity at all, they only destroy. The fish huchen, also known as “Danube salmon”, serves as an example. The Balkans are their paradise, because they need flowing rivers that are rich in nitrogen and gravel beds so that they can spawn: “Millions are currently being invested in trying to keep the remaining stocks alive here in Austria by renaturalising the rivers. But this is only half successful and it will never be possible to return a river to its original state. On the other hand, money is paid to make healthy stocks sick. This is one of many examples that show how absurd the situation is,” Eichelmann and Podić say. Before, the river flows for everyone, after construction, one family benefits from it for generations, while all the others suffer. But something is happening. “In terms of civil society, the Balkans are an absolute role model for the Western countries in terms of personal commitment to nature. I am thinking, among others, of the women of Kruščica who occupied a bridge for more than 500 days and nights to successfully prevent the construction of two hydroelectric power plants. And there are more examples,” Eichelmann says. Today, Riverwatch cooperates with several lawyers in the Balkans to oppose the planned mini hydropower plants. It also works with scientists: “We now travel with them to Albania to the river Vjosa. We will use the results of the investigations for legal actions against the construction of water plants.”

The Vjosa River in Albania is also one of the world’s unique natural assets. Biologist Olsi Nika from the NGO EcoAlbania has been fighting for the rivers of his homeland since 2010. He actually grew up by the sea and realised how unique the rivers are: “The Vjosa is the last great natural and intact river in Europe. It is important to maintain the natural watercourse so that the naturally occurring biodiversity can also survive.” So far, the construction of hydroelectric power plants has been prevented, in part thanks to international communication, in which actor Leonardo Di Caprio also participated. Nika is now fighting for Vjosa to be recognised as a national park: “A national park is a natural area. 70% of it is untouched nature, while the rest can be used sustainably and traditionally by the inhabitants in harmony with nature. But the most important point is that no hydroelectric power plants or oil rigs can be built in a national park. That is our goal.”

Ulrich Eichelmann, Anes Podić and Olsi Nika – they are synonymous with an international network that works to preserve rivers. With success – quite a few hydroelectric power plants could be prevented. And the governments in the Balkans feel compelled to change the laws in favour of the last living rivers. If you want to see what naturally living river systems look like or have looked like, you have to go to the Balkans. Especially to Bosnia-Herzegovina or Albania.