The Future of Female Entrepreneurship in the Danube Region 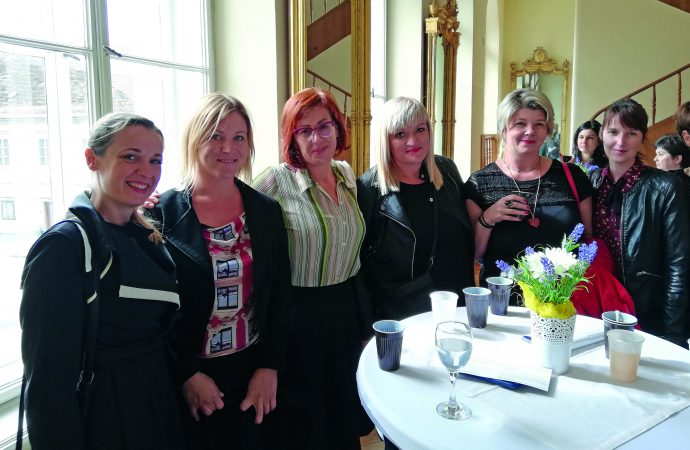 How can female entrepreneurs be promoted and supported, made more visible in business life? What do women need on their way to self-employment and how can networks of female entrepreneurs become more closely linked? These and other topics were discussed at the capitalisation event “Promotion of Women’s Entrepreneurship in the Danube Region” on 3 October

How can female entrepreneurs be promoted and supported, made more visible in business life? What do women need on their way to self-employment and how can networks of female entrepreneurs become more closely linked? These and other topics were discussed at the capitalisation event “Promotion of Women’s Entrepreneurship in the Danube Region” on 3 October in Varaždin, Croatia.

112 million people live in the Danube Region, more precisely in the 14 member states of the EU Danube Region Strategy. Although 52 percent of them are women, men are clearly in the majority among entrepreneurs.

The “Promotion of Female Entrepreneurship in the Danube Region” combines the capitalisation event of priority area 8 of the EU Strategy for the Danube Region (PA8 EUSDR) organised by the PA8 working group “Entrepreneurial Initiative for the Danube Region” with support by the ministries responsible for economic issues in Croatia and Baden-Württemberg. These two ministries are responsible for the co-ordination of PA8, which aims to support SMEs throughout the Danube region. This priority area comprises a total of five working groups which are open to the public and whose membership is free of charge. The event at the Croatian National Theatre in Varaždin brought together entrepreneurs and decision-makers from Croatia, Slovenia, Bosnia and Herzegovina, Serbia, Bulgaria, Romania and Moldova.

Cooperation as the key to success

“The European Commission is working on this strategy to reduce disparities between the Danube countries. Some countries are highly developed, such as Baden-Württemberg, others are not,” said Nirvana Kapitan Butković of the Croatian Ministry of Economy, Entrepreneurship and Crafts, coordinator of the PA8 of the EUSDR; she gave a brief overview of the macroeconomic strategy for the Danube region at the opening of the event. It took place in Varaždin, the city with the highest proportion of entrepreneurs in Croatia. One of the reasons could be the Varaždin Tech Park, which currently houses 42 IT companies. It began twelve years ago in the building of a former textile factory, donated by the city of Varaždin and transformed into a hub for IT companies with World Bank funds. “In the last two years, half of the new companies that have joined Tech Park have been founded and held by women,” says Emilija Stručić, Tech Park’s consultant specializing in finance and EU funds. “Over the years of practice, we have found that the mix of female and male entrepreneurs produces very good results, and the reason for this is their different business approach. Men are more vulnerable to risk. Their businesses grow faster, but they also fail faster and easier. Women are more cautious, so their businesses grow more slowly, but they are usually more stable. When entrepreneurs of both genders come together, they can learn a lot from each other,” Emilija Stručić said.

Olivera Popović of the Association of Women Entrepreneurs in Serbia also tackled the topic of cooperation in her presentation. She spoke about the mentorship between experienced female entrepreneurs and their young colleagues who are just starting out in business. “We started mentoring programmes in Serbia informally, and over time we have established certain rules and procedures. The crown of the mentoring program is when there is a partnership between the mentor and the mentee and we have had many such cases in our practice,” says Olivera Popović, professional with 20 years of experience in consulting and monitoring businesswomen, adding that theirprogram is characterized by the will of the participants to, at the same time, be the mentor and the mentee. Her advice to young women with the ambition of starting their own business is to be curious and to keep their eyes open in search for new ideas.

One of the young women who would fit this description is Sanja Drakulić, a young Croatian actress, radio presenter, casting director, founder and CEO of the Duart European Actors Platform. She founded Duart in 2013, at the age of 23. After her first casting experiences she quickly realized that Croatia is quite “hot” for the film industry (in recent years many movies and TV series have been shot there, including the smash hit Game of Thrones), and that the demand for Croatian actors is growing, but there is no organized way for foreign production companies to find them. “In Croatia, there are no agents and managers like in the USA, so I decided to start a company that would be a kind of “LinkedIn for the film industry”. I started to create an actor database and at the beginning my only source was Facebook. But within a year we already had 150 actors on our platform,” said Sanja, who plans to create a second internet platform for other Croatian professionals in the film industry.

The burden of our education

Entrepreneurship is a very individual sport, a conclusion being that one meets women like the ones at the event in Varaždin. And each one has her own pace. For 36-year-old Marina Kolar, owner of Konekta, a Croatian consulting and training company, it took much longer to decide to start her own business. She has over 16 years of professional experience in employment and consulting companies and completed several training courses when she founded Konekta. Today she advises both individuals and companies. The majority of her clients are women. “Statistics show that it takes more time for women to start their businesses, it is the legacy of our education. We were told not to be pushy and just do our job quietly. It is harder for women to make tough choices. There are many levels of these problems, from the more demanding roles we have in our families, to uncertainty and lack of entrepreneurial skills, especially when it comes to self-promotion and branding our work. I was also very insecure when I started. I try to get the message across to my clients that they need to believe in themselves and learn to appreciate their work. Because if they don’t, nobody else will,” says Marina Kolar.
The most dynamic talk at the conference was given by Marta Turk from the Slovenian business community, who made the participants get up and dance. Marta has been a consultant and mentor for decades, she owns a publishing house and the list of her previous engagements in business associations is very impressive. “I have travelled the world and seen the same story everywhere: When women start a business, it is mainly because they are forced to do so because of job losses or necessity. Young women are often unattractive to employers because they think there will soon be a baby on the way. Many women respond by giving up motherhood for business, and that’s completely wrong,” says Marta Turk. She added that many European countries have demographic problems and that men should recognise that supporting women in business and entrepreneurship is not an individual matter, but an investment in the future of society.